I'm sorry to say that it has come to my attention that one person is being "blamed" for the information that I have been sharing with you all summer concerning the changes in Magnolia. This would be laughable even if it were true, but it isn't. I was just counting up the number of folks who have sent me info and photos to share with you and I come up with at least eight different people and most of those have been on a regular basis. I had one person call me on a Saturday morning and talk for an hour and it was not the person who is being "blamed." Apparently management and the new owners really had no intention of informing the park residents that Magnolia was no longer a 55+ park but a family park. I can't imagine how they thought they could do that but it seems they did. If it weren't for the pictures and information that people have been sending me all summer would any of you have any idea what was happening down there. Did we get a letter? No, we didn't and I don't know of anyone who did. Did we get a phone call? No. Did we get an email? No. . . . NOTHING!!

I have actually bent over backwards not to put the really negative "stuff" I've been given on and I certainly could have. You should seen some of the photos I have especially of the dumpster, the pool, the weeds and I could go on and on. I think most of those problems have been corrected and as I have stated the dumpster is being dumped on a regular basis, or at least it was the last I heard, the new lawn mowing people are doing a good job, the streets have been repaired, Little Hall has been remodeled and as I did state I was told it is beautiful, Allen Hall was painted, at least in the front and the managers office was remodeled. As I have repeatedly stated I do believe the new mobiles look really nice when they are all skirted and the entrances added. The fact does remain however that it is a family park and that can't be changed. Things will certainly be different, maybe not bad, but definitely different. We had hoped to stay one more year and when I typed my post the other night I was nearly crying, it made me feel bad.

I do think if any of you RVers had made a reservation for the middle section you had better check to make sure that you are still going to have a spot. At this point it does look rather doubtful. This is a picture I received today of "our spot." As you can see, it is now fully occupied by two mobiles. 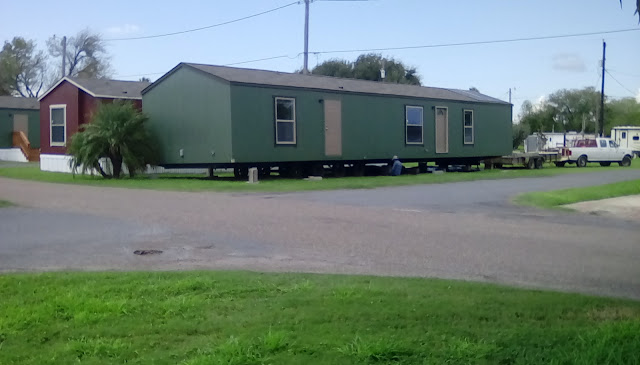 Posted by Deon Spangler at 8:47 PM