Kay Voss sent this: Look at this~!!!!!!!!! It is a papaya tree full of small fruit that we planted just before we left Texas in April, 2005. Barb and Clyde Hancock have been watering it for us! It was maybe 4 inches tall when we left. Picture is showing Barb next to tree. (She is 5 ft tall ?) Isn't that something!!!! Kay 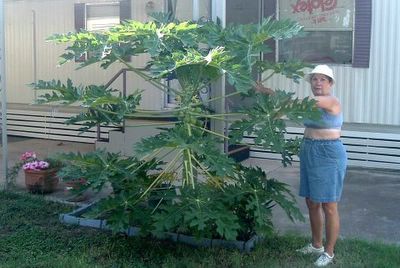 Posted by Barbara Brooker at 9:35 AM No comments:

Theresa Cootway sent the following message. Can someone help her with her questions. Her email address is tessmar@frontiernet.net. Her message follows: HI,TO YOU FOLKS AND I THANK YOU SO MUCH FOR THE IMFO,OF THE PARK, IWOULD LIKE TO KNOW ,IF ANYONE KNOWS ANYTHING ON WILMA BEAUCHAMPS DEATH, AND IF SHE WAS IN THE HOSPITAL AT THE TIME OF HER DEATH THE ONE WHO MIGHT KNOW WOULD BE MARY LOU SCHOLL. I SURE WISH THEY HAD A E-MAIL ADDRESS SO I COULD E-MAIL THEM.COULD YOU GET ME THIS INFO. THANKS AGAIN

Posted by Barbara Brooker at 5:53 PM No comments:

There is some truth to this.

Q. When is a retiree's bedtime?
A. Three hours after he falls asleep on the couch.

Q. How many retirees to change a light bulb?
A. Only one, but it might take all day.

Q. What's the biggest gripe of retirees?
A. There is not enough time to get everything done.

Q. Why don't retirees mind being called Seniors?
A. The term comes with a 10% percent discount.

Q. Among retirees what is considered formal attire?
A. Tied shoes.

Q. Why do retirees count pennies?
A. They are the only ones who have the time.

Q. What is the common term for someone who enjoys work and refuses to retire?
A. NUTS!

Q. Why are retirees so slow to clean out the basement, attic or garage?
A. They know that as soon as they do, one of their adult kids will want to store stuff there.

Q. What do retirees call a long lunch?
A. Normal

Q. What is the best way to describe retirement?
A. The never ending Coffee Break.

Q. What's the biggest advantage of going back to school as a retiree?
A. If you cut classes, no one calls your parents.

Q. Why does a retiree often say he doesn't miss work, but misses the people he used to work with?
A. He is too polite to tell the whole truth.

Posted by Barbara Brooker at 3:24 PM No comments:

Bill Brooker sent this picture that Jo took of the deer in their backyard. I think feeding them just might get a little out of hand!! 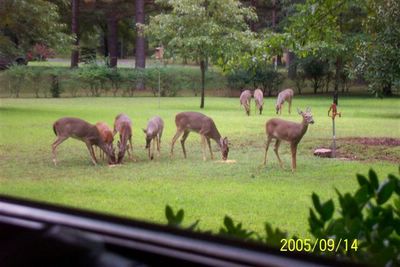 Posted by Barbara Brooker at 11:39 PM No comments:

f you, like many, are becoming a bit more conscious of aging, you might
be interested in some of the information available at this site on
health and aging. It's comprehensive, including a blog and featuring
these links and more: Health Centers, HealthandAge Network, Caregivers'
Center, Men's Health, Women's Health, News, Articles, Disease Digests,
Questions & Answers, Tools, Alternative Medicine, Primer on Aging,
MarketPlace, and News. There's also information geared to caregivers.
News under WHAT'S NEW?: HealthandAge specialist staff scan news sources
daily and bring you major items related to healthy aging. You can search
the entire news collection, and also focus on a particular health topic,
to see what recent news stories relating to that topic have appeared.
For example, did you know that gene therapy is both safe and feasible
for arthritis?
Medical Articles - Health Topics, Reviews and Counseling Articles
Posted by Barbara Brooker at 4:45 PM No comments:

See the USA like you've never seen it before!
Map lovers will love this site — The Color Landform Atlas of the United States. Click onto the state you wish to view and then see it through various maps including satellite views. This is so cool!

Posted by Barbara Brooker at 10:31 AM No comments:

It is 48 degrees this morning in Carson City NV so my thoughts are turning to South Texas. It won't be long now till we are once again all together enjoying the hustle and bustle of another season. In the meantime enjoy this recipe!
Omelets in a Bag!
Have your guests use a permanent marker to write their name on a quart size freezer bag. Crack two large or extra-large eggs into the bag (more than two will not work), shake and knead the bag to break the yoke and combine the eggs. Provide a variety of ingredients such as cheese, ham, onion, green pepper, mushrooms, tomato, hash browns, salsa, etc� Have the guests add the prepared ingredients of their choice to the bag and shake. Make sure to get the air out of the bag and zip it up. Place the bags into rolling-boiling water for exactly 13 minutes. You can usually cook 6-8 omelets in a large pot. Use another pot of boiling water if you have more than 8 omelets to make. After 13 minutes, have the guest take their bag, open it and the omelet will roll out easily onto their plate. Be prepared for everyone to be thrilled. A serving suggestion would be with fresh fruit and a coffee cake, muffins, caramel rolls, jelly rolls, etc� The omelets are a great conversation piece and everyone gets involved in the process. It's easy, convenient, delicious and low-fat!! Have FUN!!