On Peter Piper Pizza night.
Enjoying Pizza at the Wendt's with the Dave and Wayne Bruun's and the Misfeldt's. 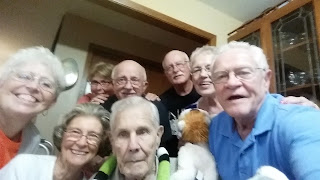 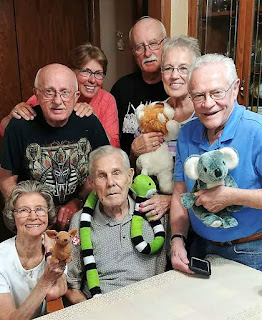 Posted by Barbara Brooker at 9:26 AM No comments:

"My daughter Leilani and Natalia celebrated birthdays with the craft ladies and Leilani's brother Mike." 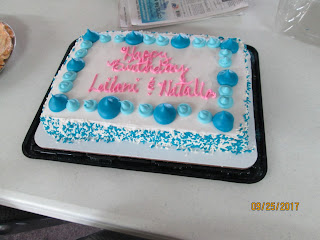 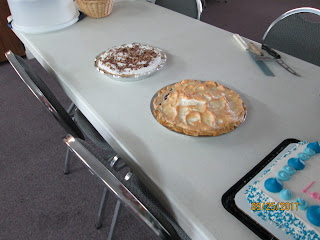 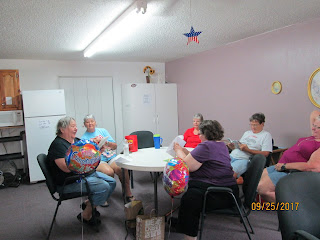 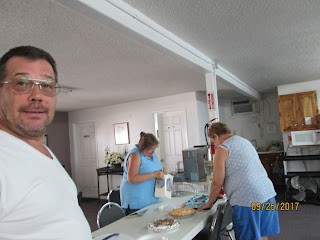 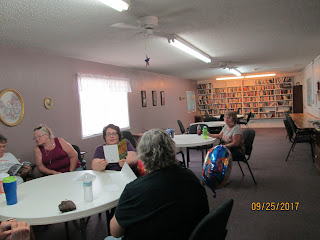 Holding down the fort! 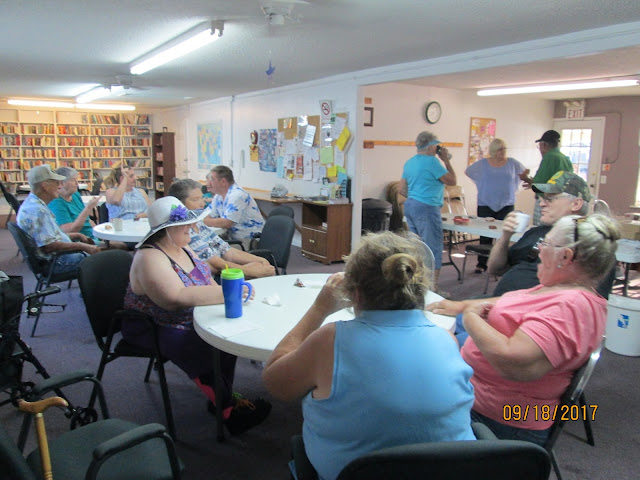 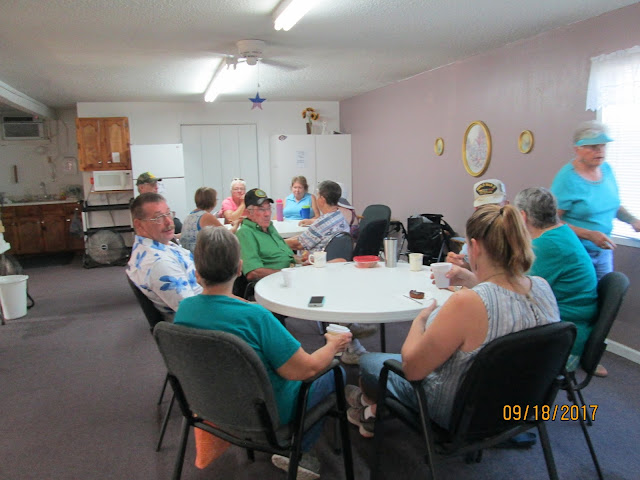 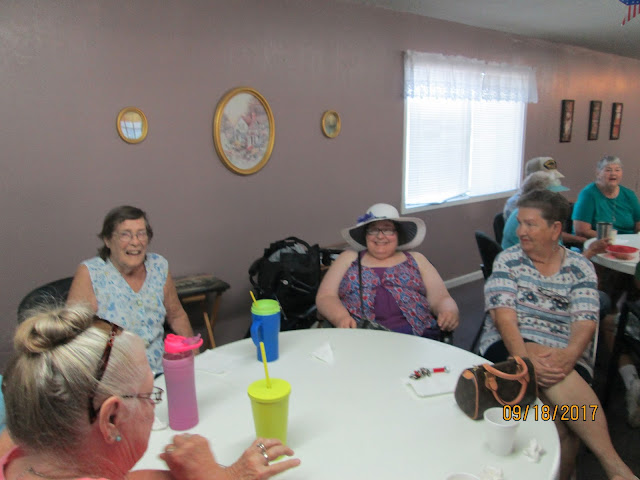 And here is Marie Flood's daughter and husband from Oregon 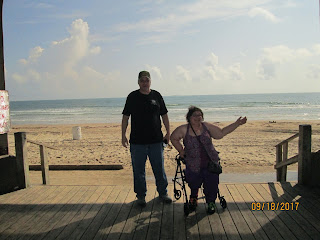 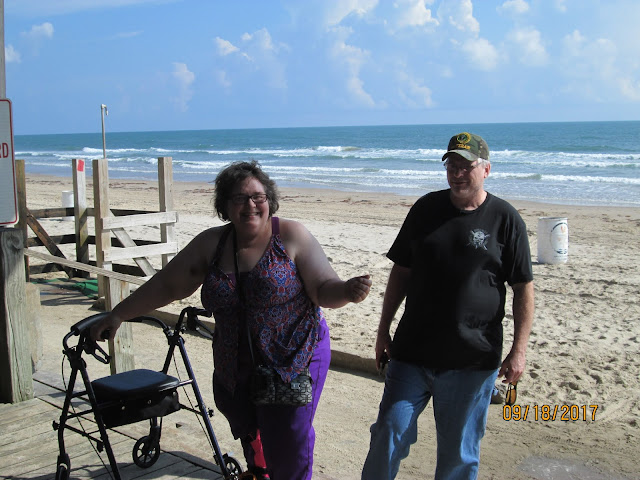 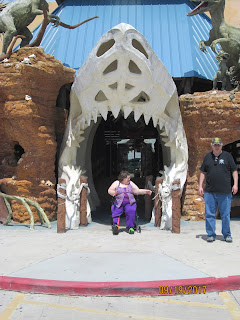 Posted by Barbara Brooker at 12:42 PM No comments:

Make it ahead or throw it together at the last minute. Serve it cold or nuke it just enough to take the chill off. Whatever the occasion for a camping meal, this simple slaw will be a snap for the camp chef and a hit with hungry crew.


Cole slaw mix is available shredded fine or coarse, with or without carrot and some purple cabbage for color. Take your choice.

Put raisins in a small cup and cover with juice drained from the oranges. Let stand 30-60 minutes, then drain well. In a bowl lightly toss ham, cabbage, raisins and oranges with dressing to taste.  Mound on plates and sprinkle with sunflower nuts. Serves 4 to 6.

See Janet Groene's tips and trips for women who travel by RV at https://solowomanrv.blogspot.com
Posted by Barbara Brooker at 7:58 AM No comments:

But I will leave it for your viewing enjoyment. 😉
Posted by Barbara Brooker at 3:02 PM No comments:

Butch and I have been a whirlwind of activity today. Yesterday Jason helped me get my landscape fabric over my hostas with holes cut so they can grow through. To back up a bit, I had been wanting some hostas so I asked a Master Gardener I know if she planned to thin some hostas or knew anyone who was and she told me that it is a myth that hostas need to be thinned. She said hostas are one plant that will take care of itself. On one hand that is good news for after I have them established but not so good for when I want some to plant. So rather than run myself ragged trying to find some, I ordered some online and Butch helped me get them planted last Friday. I received them last Wednesday, planted on Friday and they were visibly growing on Sunday. Not bad so far. $30 for 11 plants. So today I wanted to get them mulched. I put bowls over the plants to speed up the mulching process. Butch brought me the mulch and I finished in no time. I took this photo while waiting for the mulch. The upside down flower pot is another project. 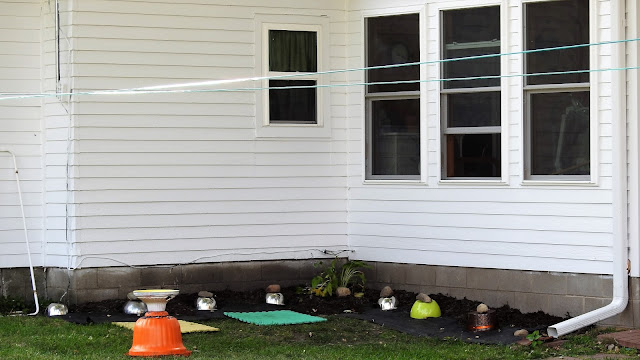 I was going to toss the orange pot because it was past its prime but decided to turn it upside down, paint it and add a plate for a bird feeder. In the picture, it is an experiment before painting to see if I thought it was worth the effort. I did and will take a picture of the finished project later. Also while waiting for the mulch to arrive I took these photos:
Painted lady with frazzled right wing on miniature hollyhock. 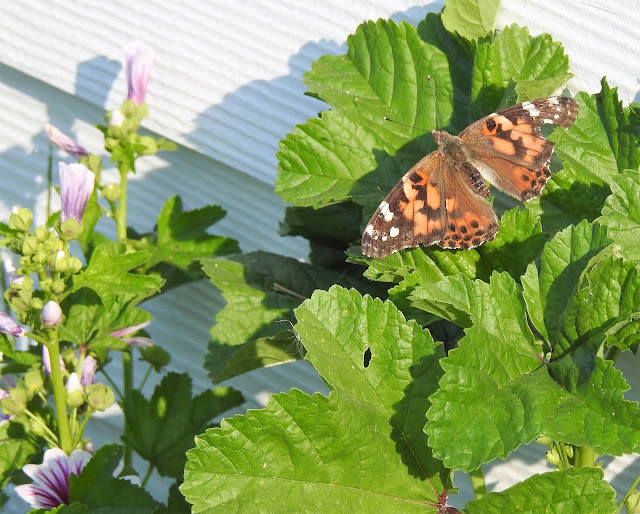 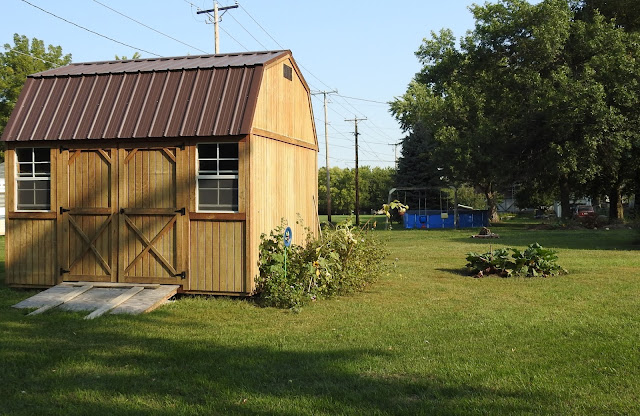 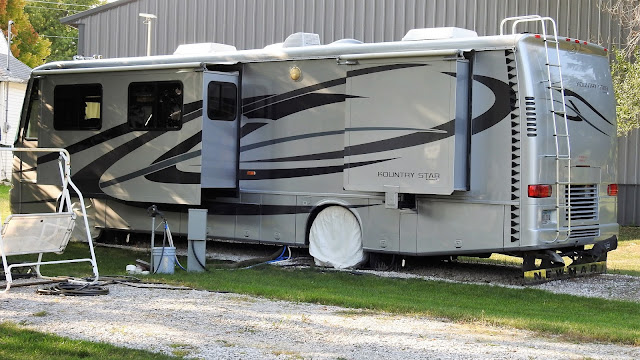 Then Butch went golfing and when he returned he did some maintenance on the motorhome. Checked the batteries and filled them with water and cleaned those two bins. I went for a bike ride, not all the way to Winkleman's Switch but only to Rogers Road. There was a strong southerly breeze this morning. I stopped at this spot and kicked all the walnuts off the trail. There were other places where there were walnuts but this was the worst spot. 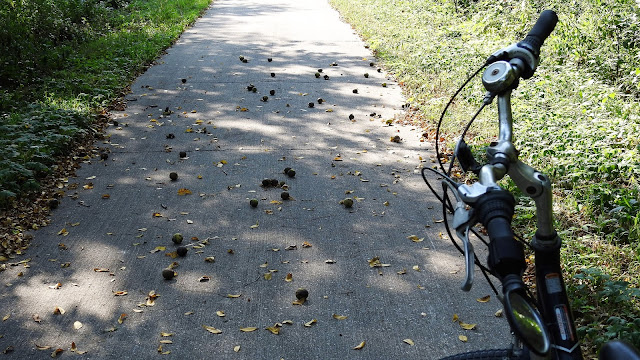 These next shots were taken as I was sitting at the computer looking in the back yard birdbath/satellite dish. I kept all three of these shots because this young house finch is saying something different in each one. 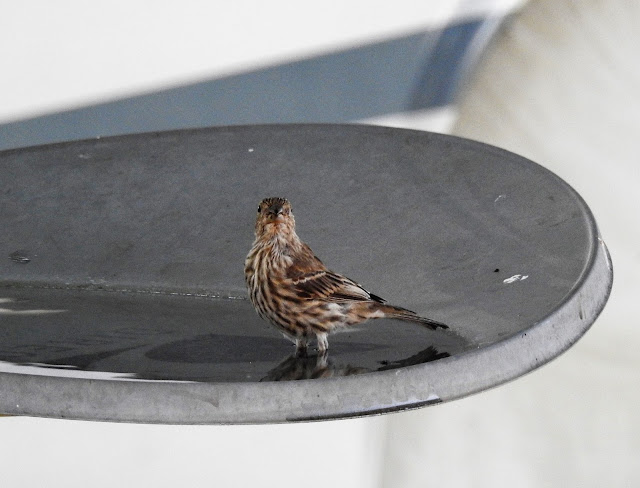 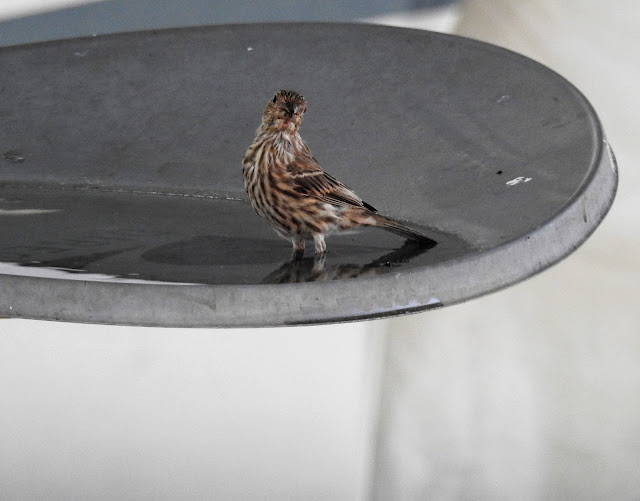 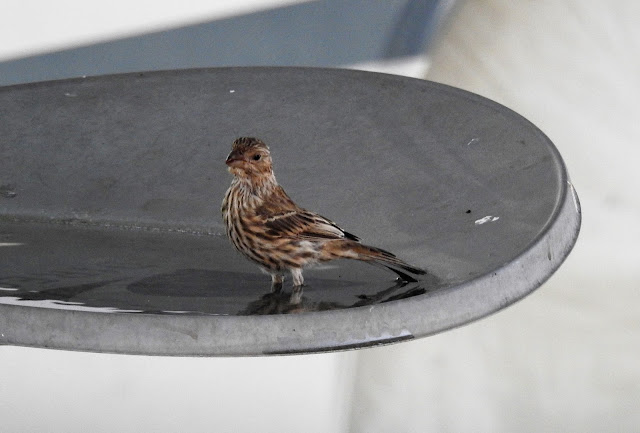 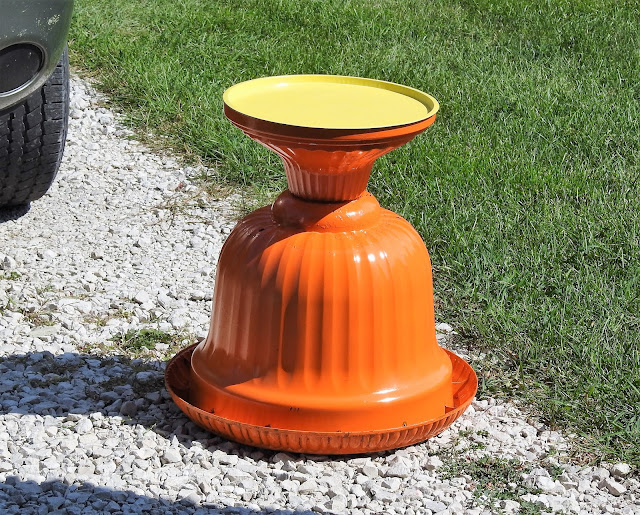 Posted by Barbara Brooker at 3:01 PM No comments:

Cottage Cheese Corn Cakes Have something different for breakfast when you serve these hearty hoecakes with syrup. They are also good served hot with butter and honey alongside steaming bowls of chili or just a simple mug of tomato soup. There is no substitute for real buttermilk but you could substitute sweet milk soured with a teaspoon of lemon juice or vinegar. Stir, let clabber for a few minutes. 2 cups yellow cornmeal2 tablespoons baking powder½ teaspoon each salt and baking soda1 cup cottage cheese2 eggs1 1/3 cups buttermilk½ stick butter, melted Put dry ingredients in a clean bag and jostle bag to mix. In a bowl whisk cottage cheese, eggs, buttermilk and melted butter. Stir in dry ingredients until evenly mixed. Ladle out about 1/3 cup at a time and cook as for pancakes until toasty on both sides. Serves 4 to 6.
Posted by Barbara Brooker at 11:58 AM No comments:

Vern & I and our children would like to Thank everyone who sent us the Anniversary cards, it was so special hearing from our friends in the valley which was such a part of our lives.
We celebrated as a family with all our children, grandchildren, and great grandchildren present and receiving greetings from friends made our day very special.
Wishing all of you another great winter in the valley. 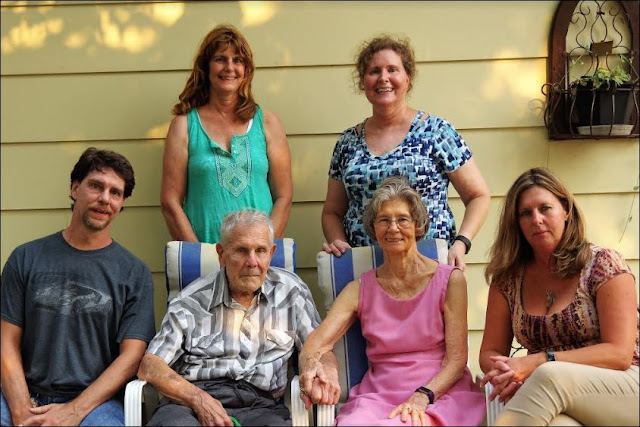 Kay says: I canned something "new to me" yesterday.    Milk ....12 quarts and 8 jelly jars of cream cheese!   I have wanted to try it for a long time, and both milk and the cheese were cheap enough in Sam's.  It looks good and the canning group I belong to talked about it.  Apparently, lots of people do it.....ha I have frozen milk and it is not what we like....it gets watery with ice crystals.   This looks really good.   Both were processed in a pressure canner. 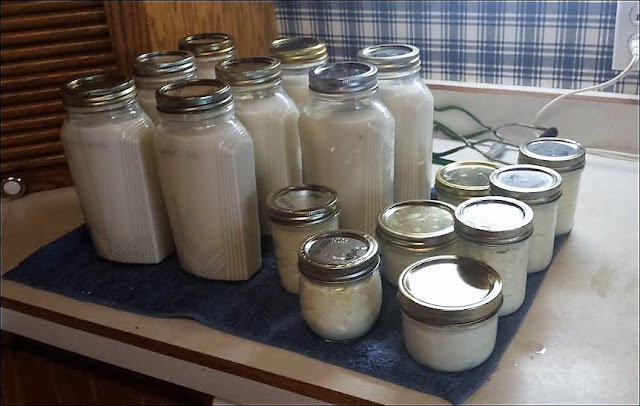 "Our raspberries are starting again.  Some are bigger than my thumb!  The Yellow ones are my favorite because they are sweet-sweet!" 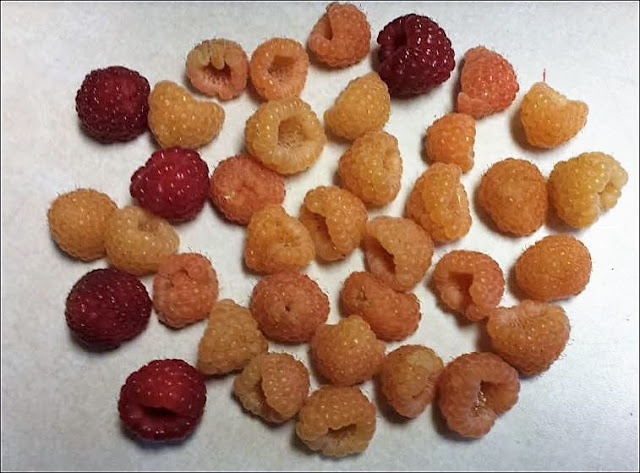 Posted by Barbara Brooker at 12:46 PM No comments: