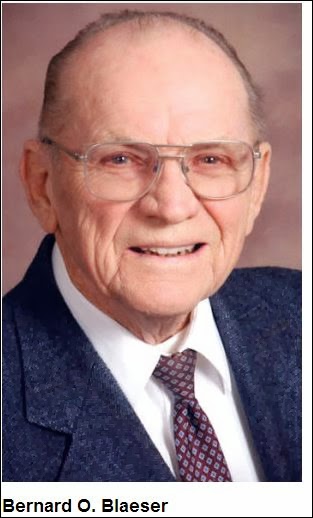 Posted: Friday, December 27, 2013 12:00 am
Whoever believes in Him shall not perish, but have eternal life. John 3:16
Bernard O. Blaeser passed away peacefully on Monday, December 23, 2013, surrounded by family.
He was born on Christmas Day in 1923 to Carl and Tena Blaeser. In 1937, he graduated from Chippewa Falls High School. He married his best friend, Beverly Walker in 1942. Barney was a go-getter and worked hard at any job he had. Through the years, he was employed at A.E. Rogers Dealership, Gillet Rubber Co., The Harischfeger Corp., and Fuller Brush Co. He found his calling in barbering and owned his own shop in Chippewa Falls. During World War II he was a PFC in the U.S. Army Air Force. He served from '43-'46.
Barney is survived by his sister, Jeanette (Fran) Gagnon; sisters-in-law, Marcella Blaeser and Darlene (Dale) Sommerfeld; special nephew, friend and roommate, Mark Gagnon; his son, Dennis (Joann) Blaeser; daughter-in-law, Carol Blaeser; grandkids, Corey Blaeser, Kim (Grant) Heiman, Jodeen (Steven) Flaten, Tammy Blaeser and Matt Blaeser; great-grandkids, Garrett (Gwen) Heiman, Jayde, Breanna and Mackenzie Heiman, Tucker and Samuel Flaten. He has additional nieces and nephews he loved very much.
Barney was preceded in death by his wife, Bev, in 2007; his son, David in 2012; brothers, Cliff and Willard; nephews, Steve, Jeff and Mike Blaeser.
Visitation will be at 1 p.m. on Sunday, December 29, 2013. Service of Worship at 2:30 p.m.. Both will be at Concordia Lutheran Church, 3715 London Rd., in Eau Claire, where a lunch will follow the service. Pastor Aaron Hamilton will officiate.
Posted by Barbara Brooker at 8:18 PM