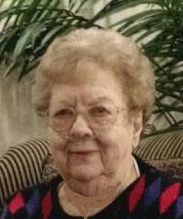 Anne Person, 96, of Monticello and formerly of Fort Dodge passed away Thursday, April 6,2017 at the Jones County Medical Center in Anamosa.
Funeral services are 10:00 a.m. Wednesday, April 12,2017 at Laufersweiler-Sievers Funeral Home and then 10:30 a.m. a Mass of Christian Burial will be at Corpus Christi Church with Msgr. Kevin McCoy officiating. Burial will be at Corpus Christi Cemetery. A visitation will be 4:00 to 7:00 p.m. TODAY at the funeral home.
Anne is survived by her sons, Tom Beadle and his wife Dee of Monticello and Dan Beadle and his wife Virginia of Gold Canyon, Arizona; 9 grandchildren; many great-grandchildren; and sister Virginia Archer of Cedar Falls.
She was preceded in death by her parents, Fred and Cecil (Haggerty) Heman; husband, Thomas Beadle in 1967; husband, Eugene Person in 2012; and brothers, Sumner, Richard, John and Robert.
Anne L. Heman was born on February 12, 1921 in Fort Dodge. She was raised and educated in Fort Dodge and graduated from Fort Dodge Senior High School. Anne was united in marriage to Thomas Beadle in 1940 and established their home in Fort Dodge. Thomas passed away in 1967. In 1974, she was married to Eugene Person. The couple lived in Fort Dodge and spent 30 years at Twin Lakes. She had been active in the Democratic Party, Swedish Club and has enjoyed sewing, quilting, and crocheting.
Memorials may be left to the discretion of the family.
Posted by Barbara Brooker at 10:48 AM