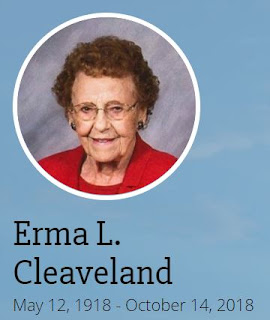 
Erma attended country school until the eighth grade. After the death of her mother, when Erma was twelve, she took on the household duties, along with being a housekeeper for several families. On January 22, 1937, Erma was united in marriage to Berwyn Cleaveland at the Council Bluffs Methodist Parsonage. They rented a farm for a short time before purchasing a farm west of Oakland. They moved into town when they purchased a truck line. Erma worked as the dispatcher and bookkeeper until they sold the truck line in 1960. Erma and Berwyn owned and operated several businesses: a boat shop, an auto body shop, the Sinclair Station, and a feedlot cleaning business. Berwyn died May 24, 2010. Erma remained at home until several years ago when she moved to Oakland Heights Assisted Living.


Erma was a member of the Oakland United Methodist Church and the Farm Bureau Ladies. She enjoyed gardening, crocheting, and sewing.


She is preceded in death by her husband; her parents; her brothers Harold and Orland; and her sister Eileen.


Funeral services will be Wednesday, October 17, 2018, at 10:30 AM at the Oakland United Methodist Church in Oakland. Interment will be at the Oaklawn Cemetery at 1:00 PM. An open visitation will be held at the Rieken Vieth Funeral Home on Tuesday. The family will not be present at any specific time. Memorials may be given to the Oakland United Methodist Church. Rieken Vieth Funeral Home in Oakland is assisting the family.

Posted by Barbara Brooker at 8:00 AM