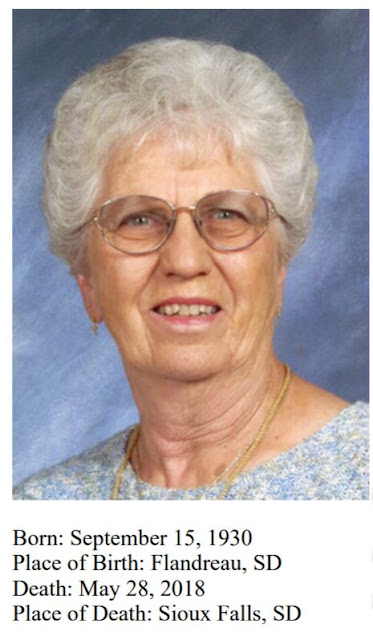 Shirley Tirrel-Anderson
September 15, 1930 - May 28, 2018
Shirley Tirrel-Anderson, 87, of Sioux Falls, SD, died Monday, May 28,
2018, at Good Samaritan Villages in Sioux Falls.
Funeral services will be 10:00 a.m., Saturday, June 2, 2018, at Faith United
Church in Brandon, SD.
Visitation with family present to greet friends will be from 5:00 p.m. until
7:00 p.m. on Friday, June 1, 2018, at George Boom Funeral Home &
Crematory.
Shirley Jean Pearson, daughter of Eugene and Sophie (Grafing) Pearson was
born September 15, 1930, in Flandreau, SD.
She grew up in the Flandreau area attending school there.
She was united in marriage to Heye Tirrel on August 8, 1947, at 1st
Presbyterian Church in Pipestone, MN.
They farmed near Canton for several years before returning to Pipestone.
Their time farming took them back to Flandreau and later to Jasper, MN.
In 1959, they moved the family to Brandon, SD, where they would spend the
next years until Heye's passing in 1995.
During her time in Brandon, Shirley was a charter member of Faith United
Presbyterian Church in Brandon.
She also served as a cub scout den mother for 13 years.
She was also proud to have been the Jr. Bowling Coach in Brandon for over
20 years.
She also enjoyed bowling on leagues during this time.
On October 23, 1998, Shirley was united in marriage to Orlen Anderson at
Ben Claire UMC in rural Valley Springs, SD.
The couple moved to Sioux Falls and they have been members of
Westminster Presbyterian Church in Sioux Falls.
She enjoyed selling Avon products in Sioux Falls.
Some of her hobbies also included playing cards, antiquing and attending
garage sales.


She was a member of the Red Hat Society.
Shirley also supported the American Legion Women and Moose Lodge
Auxiliary.
A love of football grew in her from the many times watching her sons and
grandsons play.
She loved watching NFL and College games once her family was done
participating.
Many winters were enjoyed in Donna, Texas.
Left to cherish her memory are her husband, Orlen Anderson of Sioux Falls;
sons, Jim Tirrel of Sioux Falls, Jay (Lorraine) Tirrel of River Falls, WI, and
Wade Tirrel of Hartford, SD; daughter, Gaylin (Glenn) Scott of Valley
Springs, SD; grandchildren, Jessica and Joshua Tirrel; Andrea (Mike)
Harstad, Nicholas (Rebekah) Scott, Ashley (Steve) Finnerty, and Nathan
Scott; McKenzie and Taylor Tirrel; and Cole, Chase, and Sydney Tirrel; 11
great-grandchildren; sisters, Judy Rath of Egan, SD and Lucille Johns of
Sioux Falls; 3 stepchildren; 10 step-grandchildren; and 10 step great
grandchildren.
She was preceded in death by her parents; husband, Heye in 1995; three
brothers in infancy; brother, Glen Pearson; sister, Dorothy Hammer; and one
stepchild.
Posted by Barbara Brooker at 8:50 PM