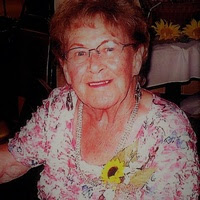 Irene I. Paulson, 88, of Bismarck, ND, formerly of Bowman, ND, passed away on Monday, April 16, 2018 at the Missouri Slope Lutheran Home in Bismarck.

Mass of Christian Burial will be held on Saturday, April 21, 2018 at 9:00 a.m. at the St. Charles Catholic Church in Bowman.  Fr. Paul Eberle will celebrate the Mass with burial to follow in the Bowman Cemetery.  There will be a Family and Friends Service on Friday, April 20, 2018 at the Krebsbach and Kulseth Funeral Home Chapel beginning at 7:00 p.m.  Visitation will be from 12-9 at the Krebsbach and Kulseth Funeral Home Chapel.
Irene was born in Bowman, ND to Irvin and Matilda (Schaff) Herman and grew up with her parents and sister, Esther (Herman) Lininger on the family farm north of Scranton, ND.

Irene graduated from Bowman High School in 1947. She attended college in Dickinson, ND obtaining her Teaching Certificate. She proceeded to teach country school for one year.

Irene married Paul E. Paulson on November 26, 1949. She and Paul farmed and raised their family south of Bowman. After retiring from farming, Paul and Irene embarked on a new adventure, moving to Alaska to manage the Knik Bar near Wasilla, Alaska. After approximately 2 years they moved back to their home in Bowman. Shortly after, they started spending winters at Magnolia Park in Donna, Tx, enjoying many friends and activities.

Over the years, Irene “wore many hats”. She was not only a farm wife and mother, but had been a salesman selling Tupperware and Shaklee, managed and cooked at the Homebase Auction Market café during the livestock sales, making and serving many of her delicious homemade pies, bartended and served at the Flagstone Terrace, Silver Dollar and Harold’s Bar, worked for their retirement park in Texas, worked for a vendor at the flea market near their retirement park and even dealt Black Jack and called bingo here in Bowman!

Irene enjoyed and experienced life in so many ways. Her hard work and adventures took her from the Plains of the Dakotas to the tundra of Alaska to Mexico. She enjoyed reading, gardening, camping and fishing, crafts, playing cards and games, and bingo. She was always ready to help, spend time and have fun with family and friends.

She will be missed dearly by all her family and friends!

Krebsbach and Kulseth Funeral Services is in charge of arrangements.
Posted by Barbara Brooker at 7:49 AM