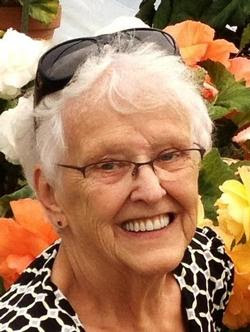 Dorothy Florence Brandes, the daughter of Archie and Anna (Laursen) McCrory, was born at Anita, Iowa on October 19, 1933 and died on June 20, 2017 at the Oakland Manor Nursing Home, at the age of 83 years, 8 months, and 11 days.
Dorothy attended country schools in Shelby and Cass counties. She graduated from Anita High School with the class of 1951 and then attended Nurses Training in Atlantic. On December 7, 1952, Dorothy and Richard “Dick” Brandes were united into marriage at the Christian Church in Atlantic, Iowa.  To this union four children were born, Kenneth, Delmar, Carol Jean (Jeannie), and Sharon Jo Ann (Shari).  In 1955, they lived and rented a farm near Oakland and eventually bought the family farm in 1970.  She moved from there in 2009.
Dorothy and Dick were members of Oakland United Methodist Church, the East Pottawattamie County Farm Bureau and the Pottawattamie Pork Producers. She was a member of the United Methodist Women and the Neighborhood Club. She enjoyed knitting, crocheting, bingo, cards and traveling. Dorothy and Dick loved spending their winters in Texas and summers in Minnesota.
Dorothy is preceded in death by her husband, Dick; her parents; and her brothers Donald and Glenn.
Dorothy is survived by her children: Ken Brandes and wife Jane, of Hancock, IA, Delmar Brandes and wife Stephanie, of Oakland, IA, Jeannie Lawrence and husband Jim, of Meriden, CT, and Shari Engle of Millard, NE; her grandchildren: Nicole Marie, Brianne, Benjamin, Jeremy, Christopher, Richard, Brittany, Sydney, Seth, and Sabrina; and her great grandchildren:  Caitlin, Aiden, Noah, Hannah, Leah, Christian, Evie, Justin, Levi, Elaina, Konnor and Trenton. She is also survived by many other relatives and friends.
Rieken Vieth Funeral Home is in charge of the arrangements.
Posted by Barbara Brooker at 3:15 PM